The Liberal Democrats will launch their manifesto for a brighter future today. Change Britain’s Future is a plan for a fairer Britain where people are decent to each other, with good schools and hospitals, a clean environment and an innovative economy.

Nothing is more important to our children’s future than Brexit. A bad Brexit deal, with Britain outside the single market, will wreck the future for our children, our economy and our schools and hospitals. That’s why at the heart of the manifesto is a commitment to give the people the final say on the Brexit deal in a referendum.

In advance of the publication of their manifesto, the Liberal Democrats are unveiling a raft of policies to give our children and young people a brighter future. These include:

“Imagine a brighter future. You don’t have to accept Theresa May and Nigel Farage’s extreme version of Brexit that will wreck the future for you, your family, your schools and hospitals.

“In the biggest fight for the future of our country in a generation, Jeremy Corbyn’s Labour has let you down by voting with Theresa May on Brexit – not against her.

“The Liberal Democrats want you to have a choice over your future. You should have your say on the Brexit deal in a referendum. And if you don’t like the deal you should be able to reject it and choose to remain in Europe.

“We want to give all our children a brighter future in a fairer Britain where people are decent to each other, with good schools and hospitals, a clean environment and an innovative economy. Not Theresa May’s cold, mean-spirited Britain.

“A vote for the Liberal Democrats can change Britain’s future.”

The Liberal Democrats will help working people buy their first home for the same cost as renting, with a new model of ‘Rent to Own’ homes, where each monthly payment steadily buys you a share in the home, which you’ll own outright after 30 years, just like with a normal mortgage. This proposal is part of our plans to deliver 300,000 homes a year with government commissioning homes to fill the gap between private sector building and demand.

The Liberal Democrats would restore Housing Benefit for 18-21 year-olds. Research by the Liberal Democrats has shown an estimated 18,000 young people will be potentially hit by the government’s decision to strip 18-21 year olds of housing benefit, which came into force in the beginning of April. Charities have warned the change could increase levels of homelessness amongst young people.

The Liberal Democrats will introduce a discount bus pass available to all young people aged between 16 and 21 who are ordinarily resident in England. The bus pass will grant the holder a 66% discount off a single or return ticket on local bus services. Bus companies will be allowed to add their own discounts on top of that. The scheme would be implemented using the same mechanism as the English National Concessionary Travel Scheme (the over-60s free bus pass).

The Liberal Democrats will introduce votes at age 16 for elections and referendums across the UK, and make it easier to register to vote in schools and colleges. At 16 people are subject to all the laws of the land, pay taxes, can become a company director, get married, join the army and in many regards act as full members of society. It is right they get a vote at election time.

Investing £7bn in our schools and colleges

The Liberal Democrats will reverse cuts to frontline school and college budgets by protecting per pupil funding in real terms and introduce a fairer national funding system, which includes protection so that no school loses out.

Doubling the number of businesses that take apprenticeships

We will aim to double the number of businesses which hire apprentices, including by extending apprenticeships to new sectors of our economy, like creative and digital industries. As part of raising the number, and quality of apprenticeships, we will ensure that all the receipts from the Apprenticeship Levy in England are spent on training, aiming to fund a wider range of types of training.

The Liberal Democrats will increase the early years pupil premium – which gives early years settings extra money when they take on children from disadvantaged backgrounds – to £1,000 per pupil per year – this is up from £302 in 2015-16. This will pay for every disadvantaged child who took up their full entitlement to 570 hours of state-funded early education.

The Liberal Democrats will extend free school meals to all children in primary education and promote school breakfast clubs. Liberal Democrats in government already introduced free school meals for all infant school pupils – now we will go one step further and extend this scheme to all primary school pupils, as resources allow. This will ensure every primary pupil gets a healthy meal in the middle of the school day – boosting their education, health and saving parents money.

These plans will be fully costed in the Liberal Democrat manifesto which will be published today. 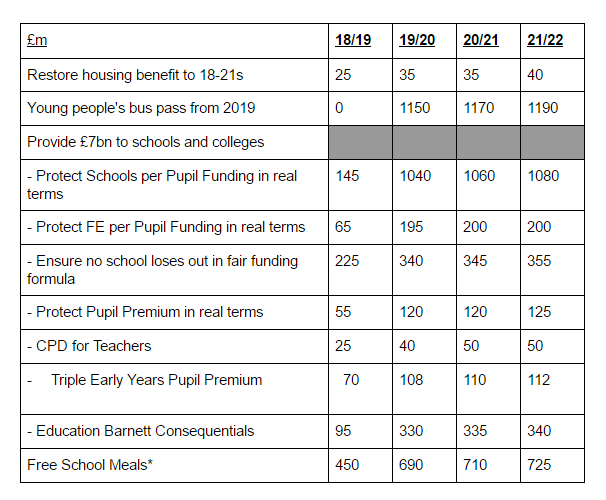